Origins of the placename

I guess it’s probably time to move onto Thurstaston itself.

From the doomsday book we have Turstanetone:

Which is accompanied by the following information:

However this doesn’t explain the name itself. Using the etymology of the name it can be deconstructed into meaning Þorsteinn ton or Thorsteinns farm. A record of the name as Torstestiune dating from 1048 backs this up.

This made my character background for the person I mainly portray when hitting people with an axe very easy.

The next bit has shamelessly been nicked from wikipedia

The village is centred on the church of St Bartholomew, and Thurstaston Hall, of which parts date from 1350, although most of the current building dates from between 1680 and 1835. A ghostly “white lady” is said to haunt the Hall.[7]

The earliest mention of a Church occurs around 1125 but other evidence suggests that one may have existed in Saxon times. The Norman church endured for many hundreds of years but was eventually taken down in 1820 and a second edifice, a plain stone building, was completed in 1824. In 1871, the executors of Joseph Hegan of Dawpool set apart £4,500 for a new church to be erected in his memory. This was designed in late-13th-century mid-gothic style by John Loughborough Pearson, also the architect of Truro Cathedral, and was built entirely of local sandstone. It was consecrated in 1886. Although nothing remains of the earlier Norman church, the tower of the second one still stands in the churchyard and the sandstone of the building was used to construct a wall enclosing the new churchyard.

In 1882 the Liverpool shipowner Thomas Ismay, founder of White Star Line, built his mansion ‘Dawpool’ at Thurstaston; Ismay is said to have used his influence to ensure that the West Kirby–Hooton railway be routed a mile away along the Dee Estuary, rather than closer to the village. He was also successful in moving the main Heswall to West Kirby road, which came too close to the doorstep of his mansion, via a cutting through Thurstaston Hill.[4] Ismay is buried in the nearby St Bartholomew’s churchyard. The solidly built ‘Dawpool’, designed by Richard Norman Shaw, was demolished by explosives in 1927.[8] Still standing in the village is the original building of Dawpool Primary School, now a private house.

Between 1894 and 1933, Thurstaston was part of Wirral Rural District, then subsequently Wirral Urban District. On 1 April 1974, local government reorganisation in England and Wales resulted in most of Wirral, including Thurstaston, transfer from the county of Cheshire to Merseyside. 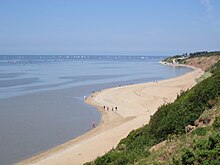 Thurstaston is notable for the large areas of parkland and heathland. Thurstaston Common is a Site of Special Scientific Interest (SSSI) and a local nature reserve. Nearby is Thurstaston Hill, a 298-foot (91 m) Triassicsandstone ridge and one of the highest points on the Wirral. On the eastern side of the hill is Thorstone Rock, a large sandstone mound which was reputed, in early times, to have been thrown by the Norse god Thor. The offices and a visitor centre of Wirral Country Park are near the site of Thurstaston railway station. The former trackbed of part of the Birkenhead Railway has been converted into a public footpath – the ‘Wirral Way’. The visitor centre contains displays relevant to the local ecology.